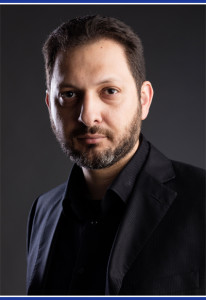 Alessandro Tirotta, lyric singer and conductor, began his study of music at the age of 4 years graduating himself in violin in young age and he perfected his skills with F. Manara (first violin at the Theater alla Scala). How singer forms under the guide of his father M° Gaetano Tirotta, subsequently he follows courses held by Enzo Dara, Luciana Serra, Ugo Benelli. He has worked for both Italian and foreign theaters, concert rooms and operatic societies, direct among the others from R. Mute, D. Oren, M. Arena, D. Renzetti, T. Licata, N. Luisotti, Niels Muus etc. After the debut as Don Geronimo in Il Matrimonio Segreto by D. Cimarosa at the Theater Modena in Genova, winning of international and national contests, it sings in numerous Theaters and Festival, among which we remember Theater Bellini of Catania, Theater Bunka Kaikan of Tokyo, Sferisterio of Macerata, Theater Nuovo of Spoleto, Bienniale Festival in Venice, Theater Morlacchi of Perugia, Theater Cilea of Reggio Calabria, Theater Bibiena of Mantova, Theater Vittorio Emanuele of Messina, Theater Mancinelli of Orvieto etc. Interpreting Don Bartolo in Il Barbiere di Siviglia by G. Paisiello, Don Basilio in Il Barbiere di Siviglia by G. Rossini, Leporello in Don Giovanni and Papageno in The magic Flute by W. A. Mozart, Colline in La Boheme by G. Puccini, role interpreted in an about ten among the most prestigious Theaters in Japan, among which, besides the already mentioned of Tokyo, we remember the Act City of Hamamatsu, Bunka Hall of Kobe, Aubade Hall of Toyama etc.; and it still sings Dottore in La Traviata by G. Verdi, Colas in Bastiano and Bastiana by W. A. Mozart, Don Chilone in Erighetta and Don Chilone by L. Vinci etc.

He has interpreted numerous Masses and Oratories of big repertoire and unpublished works, among which also the Petite Messe Solennelle of Rossini and the Requiem KV626 of Mozart. It participates as soloist a Week of Sacred Music to Gozo, for the festivities of St. George, accompanied in numerous executions by the National Philarmonic Orchestra of Malta.
He is Il Maestro di Cappella of D. Cimarosa in the double dress of Conductor and Singer, production of which he also directed. In the modern repertoire he has been interpreter at the premiere of La Baronessa di Carini (Don Caesar Lanza) and Empedocle il carceriere del vento (Pausania) in the role of the protagonist by A. Fortunato, which was performed in Agrigento’s Theater della Valle dei Templi, Palermo, Catania and Marsala.
He is also the protagonist of the work in before absolute O-X-A by A. Cortese (Orlando / Arlecchino) which was represented in Venice. Among the directors with which he has worked we remember H. Brockhaus, E. Dara, S. Vizioli, L. Codignola, M. De Carlo etc.
He graduated in Musicology at the University of Rome Tor Vergata. He is author of the book edit from the publishing Calzone “Voce di basso e baritono: uso drammatico ed evoluzione nelle opere della maturità di Verdi – da Rigoletto a Don Carlos”.
It is in exit (date anticipated Febbrary 2017) his CD produced by the Naxos (Capricio records) with romances of F. P. Tosti, V. Bellini and G. Donizetti.